Parenting- The Case Of The Dirty Rotten Little Milk-Spiller

The Case of the Dirty Rotten Little Milk-Spiller

Once upon a time, there were three parents. Or grandparents. Or other adults in charge of a child. You decide. Each of the parents was asked to deal with the (dirty rotten) little milk-spiller, Kiddo.

setting the scene for the Little MIlk-Spiller:

The parent is talking on the phone. It’s an important call, and the person on the other end of the phone is important to them.  Relaxing in a chair in the carpeted living room, the Parent isn’t paying close attention to Kiddo. Kiddo is suspiciously quiet. No one else is at home. 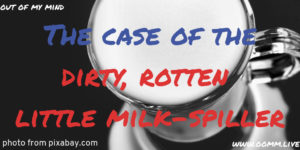 Suddenly, Kiddo comes running from the kitchen, a full (plastic) glass of milk in their hands! Kiddo smiles from ear to ear, proud of themselves for pouring the milk All By Themselves for the Very First Time.

Here’s how each parent deals with the spilled milk.

Parent One sees Kiddo spill the milk, but the call is important. Shushing Kiddo as Kiddo cries over their spilled milk, the parent returns to the phone call. The milk stays on the carpet until after the call.

Kiddo wanders off and finds something to do, alone. When Parent gets off the phone, they clean up the milk themselves. Their frustration with Kiddo builds, but they keep it to themselves.

Parent Two sees KIddo spill the milk and mutes the phone. “You Dirty Rotten Little Milk-Spiller”, they yell, “Clean that up! You are SO clumsy and irresponsible. Why do you always get into things you shouldn’t? You never take responsibility!”

The parent unmutes the phone for a second to answer a question and hangs up. Kiddo cries even louder. Does Parent Two spank Kiddo, or keep yelling? We’ll just assume it was one of the two.

Parent Three sees Kiddo spill the milk and says to the person on the other end, “I have to go. My kid needs me. I’ll call you back.” They stand up and smile at Kiddo, and their smile meets their eyes. “You poured your very own milk! I’m so proud of you!”

Then they come over to Kiddo and pick up Kiddo and the cup. “Milk belongs in the kitchen. Next time you drink it, please keep it in the kitchen. I’ll pour you some more in a minute. First, we have a mess to clean up.”

Parent Three grabs a couple of towels or a roll of paper towels and some spray cleaner or a bowl of soapy cleaning water. They smile at Kiddo. “Because you made a mess, you need to help clean it up. Let’s go clean it up.”

They go back to the living room and place the first towel, or some paper towels, over the spill. They grin at Kiddo. “Guess what you need to do! One of the best ways to clean up milk from the carpet is to help it soak into the towel. You’re not very heavy, so you’re going to have to stomp and jump up and down on the towel to get all the milk to go in it. Stomp up and down!”

Stomp! Jump! Stomp! goes Kiddo. They jump up and down, smiling up at Parent Three, proud of doing it right. Stomp! Stomp! Jump!

“Great Job,” Parent Three says. “Now we do the next part. “There are still little bits of milk in the carpet. We’re going to help them come out.” Parent Three shows Kiddo how to spray with the spray bottle or sponge with soapy water, and gets the spot good and wet again. “You did great,” Parent Three says again. “Now let’s put more towels on it and jump and stomp again.

Parent Three shows Kiddo where to throw out the paper towels or put the cloth towels in the laundry. Then they go to the kitchen, and Parent Three watches Kiddo pour the milk again, one for Parent Three and one for Kiddo. If Kiddo needs help, Parent Three helps them, reminding them to put the milk back in the refrigerator.

They drink their milk together.

What Lesson Does The (Dirty Rotten) Little Milk-Spiller Learn?

(Note: Each of these is a trend and the effect is if this is something that happens most of the time. In real life, most parents do a little of all three.

(in) action (Parent One): Depression and Loneliness

(Over re-) Action (parent two): Anxiety and Fear

When Parent Two yells and calls Kiddo names, Kiddo believes they are BAD. This wasn’t just a mistake Kiddo made, it was BIG. They are Clumsy and Irresponsible, and a Dirty Rotten Little Milk-Spiller. They can’t do anything right. If they do something wrong, it’s a Very Big Deal! Making a decision is dangerous because if they make the Wrong Decision, they’ll be Punished. They can’t trust their Parent.

Chain of Events: How DBT’s Behavioral Chain Analysis Can Help You

Parent Three uses the mistake to teach Kiddo about house rules (drink your milk in the kitchen). They teach Kiddo how to fix a mistake (step by step, they showed Kiddo how to clean up a spill on the carpet). Parent Three engages Kiddo and praises their actions toward independence. Kiddo learns that they can learn things. They can fix mistakes, and many mistakes are easily fixed. They learn that the Parent loves and trusts them, and they love and trust the Parent in return.

How to Use the Case of the Dirty Rotten Little Milk-Spiller in Your Life:

You are sometimes going to be Parent One or Parent Two. We’ve all been there. I’ve been Parent Two far too often in my life. But if your goal is to raise Kiddo to be a happy, productive adult who puts more into the world than they take from it, you need to try to be Parent Three when you can. Let’s break down what Parent Three did so you can use it for more than spilled milk.

Our self-esteem is fragile, especially as children. When Kiddo made a mistake, Parent Three looked for something good in it. Since Parent Three wants Kiddo to be independent more than they want Kiddo to be perfectly obedient, they praised Kiddo for pouring the milk by themselves.

Later, they praised Kiddo’s efforts to help with the milk in the carpet, even though they were certainly not perfect.

When Parent Three moved the cup to the kitchen and said “we drink milk in the kitchen here”, they were helping Kiddo understand what behavior was expected at Parent Three’s house. They shaped Kiddo’s behavior by asking for it, and then (later) reinforcing it by doing it again after they cleaned up the milk together.

Shaping behavior means accepting any improvement at all toward the behavior you want, and reinforcing it through appreciation (thank you!) and encouragement (please!). When the behavior still needs improvement, a gentle comment that “next time, I’d like to see…” is a good start.

Parent three put Kiddo’s needs first (hung up the phone). They stayed calm and positive and managed their frustration and irritation. When Kiddo was crying they scooped them up and reassured them. They patiently taught the tasks involved in cleaning up the milk in small steps that Kiddo could understand. Afterward, they had a little together time to celebrate their achievement together.

Keep your parenting goal in mind:

Sure, your immediate goal might be to get the milk cleaned up, but your parenting goal is to raise a child who sees a problem and generally just fixes it because that is normal to them. Your goal is a happy adult. You want your child to be confident and competent. You want a loving, trusting relationship with your child.

Manage your emotions and old “stuff”:

The reason I was too often Parent Two when raising my boys was that I have PTSD and panic attacks. My “favorite” fear responses are “fight”, and “freeze”. In parenting situations, when I had a fear response, I would fight. I would come out swinging (not literally. I very rarely spanked) and yell and sometimes call names.

As I got healthier and dealt with my PTSD and panic attacks through meds, therapy, and self-help, I became more able to be Parent Three. I was more likely to be able to think in the long term (fear and anxiety lead to short-term thinking). Far more often, I turned difficult situations into learning situations for all of us. And I had a supportive partner.

have a “Game Plan” for possible situations thought out:

Have a formula or plan for most situations in mind. The steps above that Parent Three went through when Kiddo spilled the milk can be used for many things. It will help with chores, with doing homework and yard work, and with most things that require Kiddo to have a habit of responsibility. It won’t be perfect. Kiddo won’t be perfect. But it’s good enough for most cases.

model the behavior you want:

When you mess up, apologize. When you want something from Kiddo, say please and thank you. Try to put yourself in other peoples’ shoes and be understanding of differences. Choose kindness and firmness over irritability and inconsistency. When you find yourself not meeting your own standards, model forgiving yourself. Allow your child to see you as vulnerable without giving them information about adult issues that they don’t need to know.

Final Thoughts on The Case of the Dirty Rotten Little Milk-Spiller:

No parenting advice works all the time for every person. It’s okay to have bad days (remember: model forgiving yourself). Work to try not to have bad months and bad years. If your child is struggling with things that are too big for you or for them, seek professional assistance.

Some people see the kindness of Parent Three and see weakness or permissiveness. It’s important to note that Parent Three was the only one of the three parents that got Kiddo to clean up the milk.

Ideally, you’ll start using Parent Three methods with a child who is a baby or toddler, and that Kiddo will grow up with a lifelong feeling of competency and confidence that they are loved and can love.

Don’t wait until you’re perfect. You will never be perfect. Don’t wait until the right time. There is never a “right time”. Just begin, and let Kiddo, and any other adults helping you raise Kiddo, know what you’re doing. Let them know it’s a process and you won’t be perfect, and neither will Kiddo. Just give it a go.